This piece was written and contributed by CFHI participant Carmen Simmons, who was a Medical Student at Meharry Medical College when she participated in the Women’s Reproductive Health program in Puerto Escondido, Mexico in 2018.

When first arriving at the Centro de Salud, I have to admit I was proud of myself. I had managed to find the right colectivo in a mountainous countryside in the quaint town of Río Grande. After exchanging various “Buenos Dias”, I made my way over to partera, traditional midwife, Señora Lucia Zaguilan Mayoral. 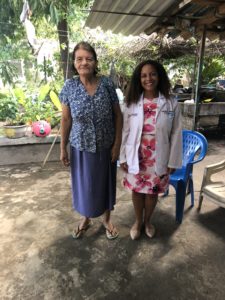 At our first meeting, Sra. Lucia patiently listened to my never-ending questions in – let’s be honest – broken Spanish. When she spoke I struggled with the speed of her words. After some compromise on both of our parts, we found a tempo that worked for us to communicate.

Sra. Lucia calls Colonial Villa De Tututepec home and is a Rio Grande native. She has been attending births since she was 13 years old (today she is 63). Coming from a long line of parteras, she started learning as her grandmother’s apprentice. To this day, her family is filled with an impressive variety of healthcare workers.

She has attended conservatively well over 5,000 births. INCLUDING HER OWN CHILD’S! Yes, that’s right, she delivered her own son. She recounted the story to me while laughing at its ridiculousness. In her last days of pregnancy, she was in the kitchen cooking when her contractions started getting too close for comfort. She can’t exactly remember why no one was home, but nonetheless she had her abundant knowledge of births to comfort her. As calm as anyone could be while delivering her own child, Sra. Lucia guided her son toward the light of life. She even cut the cord herself! By the time her family came back home, they were greeted by a nursing newborn.

During the partera training I was able to witness, Lucia reflected on the immense amount of knowledge her grandmother bestowed onto her. This particular partera training is an annual training co-facilitated by Child Family Health International, local staff and a group of Northwestern students in partnership with the Oaxacan Ministry of Health. As a young girl, Lucia learned many techniques from her grandmother including monitoring her patient’s hair, skin, and eye color and the various methods of moving a baby into the correct position for delivery.

At the partera training, I immediately noticed that all of the women were 60 years or older. I asked her what she thought had changed in the last 20-30 years since she began practicing as a partera to account for this . She comments that she, and others, have noticed a change in attitude with the younger generation. She states that “most young women (under 35) are scared of anything to do with childbirth. Many want cesareans now. And the others are too afraid to learn to be a partera.” The sociopolitical context on the increasing cesarean rate in Mexico is interesting in itself. Approximately 39% of all hospital births in the state of Oaxaca were cesarean births. The World Health Organization states when the cesarean rate goes above 10%, there is no evidence that mortality rates improve. 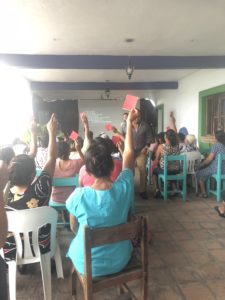 During my time with Lucia and other parteras, I learned of the integral role that Parteras play in women’s health in Mexico although it seems to be an aging profession. I also learned about the scarcity of resources (financial, equipment, etc.) that the parteras face and overcome daily in their work. I fear that communities will not truly understand the immense importance of their role until there are very few left. My hope is we don’t wait until then, and find a way to revitalize younger generations to strengthen the tradition and empower the existing parteras.