A Doctor Walks Into a Community..

For healthcare professionals or those on that path, it’s tempting to drop into a community abroad and start treating patients.  The stark realities of poverty, lack of resources, and unaddressed illness provides an often disturbing (and therefore motivational) contrast to our Western frame of reference.  We are often shocked and saddened.  As a consequence, we want to help.

An important question arises however, when we are students or even when we are credentialed professionals visiting a faraway community, what’s the best way to help? 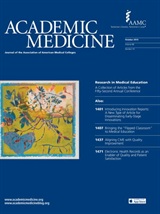 An article profiling Child Family Health International – CFHI’s Global Health Education Programs in the current online edition of the Association of American Medical Colleges’ journal Academic Medicine contrasts two interpretations of ‘helping.’  The article contrasts CFHI’s program structure to that of brigades.  Brigades are short-term (often lasting one or two weeks) international activities that set-up clinics in parallel to or completely outside of existing health systems.  These temporary establishments are meant to see many patients in a short period of time. Commonly, medications, often drug samples, are brought down from the home country of volunteers and dolled out to patients.

The students writing the article draw an important contrast between the two definitions of ‘helping’ represented by CFHI Programs and brigades.  Brigades aim to ‘help’ by directly treating patients using Western physicians and students.  But they do so often at the expense of follow-up and continuity of care.  Brigades define ‘help’ in a very immediate sense.  Contrastingly, CFHI defines helping as empowering local communities and using Western funds to develop and elevate the stature of the native health care workforce.  CFHI positions local physicians, nurses, and community members as local experts, in a unique role to teach outsiders about their approach and insight. CFHI  believes they are the sustainable solutions to global health challenges. 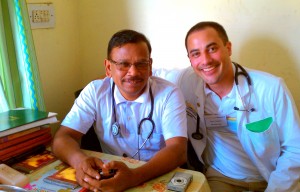 CFHI’s definition of helping is perhaps more humble, believing we need to first respect and attempt to understand the complexities that underlie global health challenges, rather than trying to address these challenges with immediate auxiliary patient care.  This admiration of local health care providers and the goal of first comprehending the complexities of global health disparities is fundamental to shaping the collaborative global health leaders of the future.  Before we try to change a reality, we must begin to understand it.  This understanding is afforded by CFHI’s Global Health Education Programs. 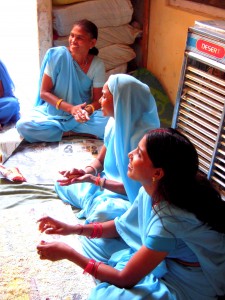 Evaleen Jones, MD is the founder of Child Family Health International (CFHI) and Clinical Faculty at the Stanford University School of Medicine.  Today, on International Women’s Day we feature an experience from her recent visit to CFHI partner sites in India, and a story from a woman she met while there.  Her story  carries the message of community empowerment that CFHI embodies.

From Skepticism to Hope: Turning Dark Profits into Enlightened Transformation

Voices of empowerment from women in rural Northern India

About an hour outside of the north Indian city of Dehradun, the terrain starts to change as you begin to enter the foothills of the Himalayas.  Paved streets give way to winding dirt roads, some seemingly carved into the incline of the mountain like the etches of a screw and only wide enough for one vehicle.  Luckily almost no one in this area has a car, so we are usually sharing the road only with the monkeys and the goats.  On this particular trip, the monsoons have not yet released India from their grip and our vehicle struggles on the loose dirt and gravel as the torrents of rain pour down.  Oddly enough, here, about as far away from an urban setting as you can get, I’m reminded of a car wash because the sheets of rain are hitting the car so hard that you can feel their force on the hood of the vehicle like the power washes you can get back home.

Luckily, as we reach the village of Patti, the torrents subside and we are able to disembark without getting too wet.  CFHI has supported the operation of a clinic in this area since the late 1990s –it is the base of the CFHI Rural Himalayan Global Health Immersion Program.  In the last seven years, we have trained women elected from the surrounding villages as health promoters.  Previous to these efforts, there was no organized healthcare happening in this area.  Today is a meeting of the health promoters, some having walked as many as five hours for the event (a fact that always humbles me greatly).  An initial three year training effort took women with little or no formal education and taught them the basic skills of health promotion.  Many of them come from a long line of traditional birth attendants, so they already had some experience in the area of health.  After the initial training, they have been able to monitor women throughout their entire pregnancy.  Additionally, they instruct their communities on many topics: sanitation, nutrition, immunizations, hygiene, and family planning, to name a few.

As the rain began to intensify once again, we huddled around two tables pushed together on a porch, under a metal roof, next to a rice field.  The sound of the rain caused everyone to move in closer and lean in to hear.  My many previous visits over the years have been in more extreme dry heat when we sat spread out in the shade as we 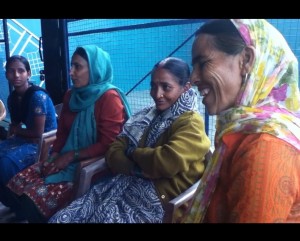 talked.  –Of course I need to stop here and say that since I have no capacity in Hindi, the CFHI India Coordinator, Ms. Hema Pandey, was gracious enough to do the translation, and her easy, relaxed, yet professional manner also contributed greatly to the level of the conversation.  Maybe it was this more close huddling, or maybe it was just the product of seven years of meeting them once or twice a year, but for whatever reason, this time the conversation took a more intimate track.  Over the years, our meetings have been about stories of the work the Health Promoters are doing, each in her own village.  I’ve always been moved by their commitment and dedication as the women are all volunteering in this role and, at times, it can occupy a lot of their time and energy.  We always talk about what they need and we try to line up successive training experiences for them.  Today, however, I somehow felt like I could ask them more about themselves.  Now, all these years into their work, I could see in them their own sense of being experienced –that they are really settling into their roles.   It also helped that there was a young 18 year old woman who had joined us for the first time, as she now wants become a Health Promoter.  The older women took her under their collective wing as she found it hard to answer any direct questions –not used to being asked her opinion.  “Don’t worry, you’ll get used to it,” was the message as all the older women laughed.  “We were all once like you,” one of them told her, “not knowing how to speak, not sure what to say … you’ll learn.”  It was also touching to see the older women buoyed in spirit by her interest.  There was more of a general feeling –not only of pride, but also of purpose, and an almost palatable sense of hope for the future in the smiles of the older women, broader than I have ever seen them before.

I asked the women what they liked most about their work.  They answered with the stories of what they have been able to do.  “And for you,” I asked, “what do YOU like about it.”  There was some discussion amongst the group. They said that they like “feeling empowered.”  “What does it mean,” I asked, “to feel empowered?”  “It means that now I can speak,” said one, motioning to the new recruit whose personal growth and self confidence the women will now each personally see to.  “It means I can teach,” said another.  “It means improvement, progress for the whole village,” said another.    This spawned a longer conversation of the feeling of satisfaction they have in seeing the results of their work.  They see women having healthier pregnancies; they see children growing up stronger and healthier.  One of the biggest changes, they report, is that now, even the men of the villages will listen to them in a way that never happened before.  The women told me that the men have come to see the women as possessing knowledge and understanding as a Health Promoter that no one else has.  What was even more remarkable than the statement itself was the body language, the tone of confidence, and the feeling of accomplishment that came through in these statements, none of which required the skills of a translator to be successfully communicated.

I had the chance to sit down with CFHI’s Medical Director, Dr. Jessica Evert, at our offices in San Francisco,  just before she was honored with an award from the Global Heath Education Consortium (GHEC) at their annual conference in Cuernavaca, Mexico.  Dr. Evert began her role as CFHI Medical Director in January.  Her education career includes studies at Emory University, The Ohio State University College of Medicine, and the University of California at San Francisco, where she continues to serve as a clinical faculty member of the Department of Family and Community Medicine.

We spoke about her introduction to Global Health, how she integrates her work as a physician in the San Francisco Bay Area with her Global Health Activities, and what attracted her to CFHI.  She talks about how CFHI’s model is one that changes the dynamic by empowering local communities through actively building on their strengths in ways that lead to sustainable solutions.

Please click on the links to listen to our conversation and you are invited to join the conversation through adding your comments below.