In October of 2009, fresh from a visit to South Africa, I wrote an entry to this Blog called The Roots in Grassroots –Ukwanda Rural Health Program.  I was so impressed with the intentional efforts of the University of Stellenbosch to successfully bring primary health care to Avian Park, an underserved community in the rural areas well north of Cape Town.  CFHI’s work has always intentionally been at the community level so this was the first time that we were helping to fund a project of a university.  On paper, it looked like a serious effort to truly do the relationship building and ground work necessary to successfully establish the first primary healthcare facility for this poor but growing community.  Our contacts on the ground were also very enthusiastic about this initiative and so CFHI chose to help support it.

What I saw in 2009 was an idea beginning to take form.  What had looked so possible on paper, was proving to be a significant challenge to implement. 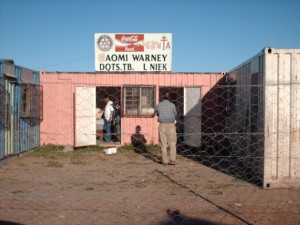 I saw a very run down set of metal freight containers being used as a makeshift TB clinic.  I saw some initial linkages with the community but everything was still new and tenuous.  CFHI’s commitment was funding that would be used to renovate the freight containers to make them fully functional.  The project was already well beyond its targeted schedule and I could see during my visit that the freight containers were not in good enough condition to be renovated but would need to be replaced.  Stellenbosch was able to get some additional funding as well as some in-kind help to make the new containers possible.  Concerns about acquiring the land where the new clinic would be, the full support of the local political and community leaders, and other logistical details were still not resolved.  Success felt illusive.  Yet, in the face of the many challenges, the Ukwanda team from Stellenbosch chose to dig in deeper, engaging the community, dealing with their concerns and creatively finding the resources to deal with many unforeseen issues that arose. 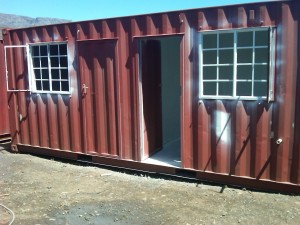 At a stage like this, I am, quite frankly, used to seeing a big university either pull back its funding and  sunset the project, or do an end run around the community and find a maneuver that would give them the legal security they need to move forward even if it does not lead to community support.  Instead of using the university’s paid legal teams to get it out of a jam, the University of Stellenbosch chose to involve its School of Law and get faculty and students from this arm of the university to research creative solutions.

This week, I paid another visit to Avian Park and I met with Prof. Hoffie Conradie, also a medical doctor whose blood, sweat, and tears have flowed into this clinic for years now.  What I saw this time was the brand new set of freight containers fully set up, painted, and functioning at about 80% of the planned use. 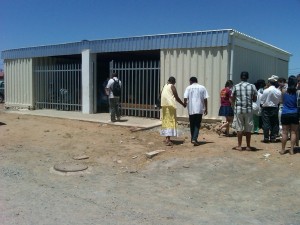 In addition to the original TB clinic, there is now an ARV clinic and a team of home-based care workers based out of the clinic.  Weekly physician clinic hours by Dr. Conradie are well attended and welcomed by the community.  Still to come will be family planning and other health education initiatives.  While a water line has made it to the clinic, electricity is still lacking but this is in the works and seen only as a minor inconvenience.  The clinic was bustling with activity and clearly has become a focal point of the community.

Even more impressive was that I just happened to arrive as a team from the University Of Stellenbosch School Of Sociology was just concluding an intensive study of Avian Park.  A social anthropology professor and his students had made many visits and conducted house to house interviews.  The students made use of volunteers from the community, mostly young people who assisted the students in navigating the unpaved maze of roads and any unfamiliar customs or local norms.  The result is a significant body of primary research data that will now be analyzed and synthesized to produce a profile of the community that will not only help the Medical School in its work in the community but also all the other arms of the university; agriculture, theology, social work, as they also look to begin projects in Avian Park.

Meeting later with Project Coordinator, Lindsay Meyer, in Cape Town, she attributed the tremendous cross pollination of efforts from Stellenbosch at Avian Park to the leadership of the university.   The Rector of the University of Stellenbosch has motivated and guided his faculty across all schools to develop strategic plans that have goals that are connected to the Millennium Development Goals of the United Nations.  All schools and departments are also required to have initiatives that are benefiting the community in some way.  With this kind of guidance, a university that often has so many disparate activities can instead become like an orchestra, each producing their own sound but from the same sheet of music. 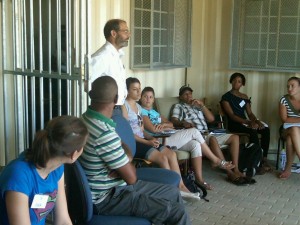 And so it was in Avian Park. The sociology students and the medical students were each doing their own endeavors but in a way that appeared to the community and to this outsider as a coordinated effort that will build on each other.  Universities can easily become a place of many silos of information growing ever higher and rarely moving horizontally in a way that combines data for richer analysis and in a way that can most effectively benefit communities.  How refreshing it is to see what can happen when the full resources of a university are coordinated and focused to help a community.

Our hats are off to the University of Stellenbosch and its Ukwanda Rural Health Project and the Avian Park Rural Clinic for their dedication and commitment to community-based work done well!