Today is World Food Day.  The United Nations Food and Agriculture Organization has issued a report that should be on the ‘must read’ list of anyone interested in global health.  There is some good news but also some disturbing news that should act as a wakeup call for the world community.  Staple food prices are at or near all time highs.  One of the most alarming facts in the report entitled Food Prices From Crisis to Stability is that just since last year the increases in the cost of basic food has, “pushed nearly 70 million people into extreme poverty.”

Past Successes Have Not Kept Pace

The report points out that while the world’s population doubled between 1960 and 2000, there were significant advances in agriculture that allowed food production to “meet and even exceed demand in many countries.”  Unfortunately, the investments in research that were made, by both rich and poor countries, to produce the much needed innovations have not been maintained in recent decades.  There has been a 43% decrease in government spending on research and development in the area of agriculture in the last 30 years.  Therefore while the population of the world continues to increase, food production has not kept pace.

The last time food prices were this high was in 2008, when the price of various staple foods shot up very quickly and there was rioting in over 20 countries as a result.  Certainly the global 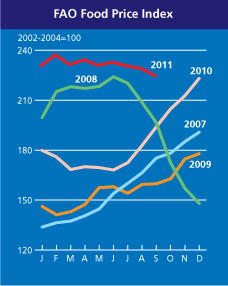 economic situation is in even less shape to deal with record high food prices today.  What’s worse is that due to the inability of food production to keep pace, “The global market is tight, with supply struggling to keep pace with demand and stocks are at or near historical lows.”

While the report warns that food price volatility may become an unsettling fact of life for the foreseeable future, it also gives some success stories that offer great hope.  If we can prioritize research and development and scaling of existing successes, we may be able to prevent some of the volatility that now seems inevitable.  Some scientific advances in Africa and Asia are resulting in higher yields but much more needs to be done in this area.  Some countries have made increasing their food production a priority by encouraging agricultural land use and supporting research.  Other countries like Mexico have been proactive in targeting assistance to some of the 70 million globally who are the new poor.  Through carefully monitored programs tied to the education system, the Mexican government has been able to provide assistance to one in four families who have been hardest hit by rising food process.  Even in these difficult times, this effort has, “…been credited with improving the health of children and adults, and raising nutrition and school enrollment levels.”

As we advocate for improved basic healthcare, we must also advocate for smart basic development that learns from the past and is doing the necessary research to keep up with our current and future needs.  For the cornerstones of global public health continue to be water, food, sanitation, and education.