Dr. Ebrahim Khan is a family practitioner with a private practice in the Kwazulu-Natal  Province of South Africa and serves as Medical Director of the CFHI program based out of Durban. As with most doctors in South Africa, the demands on his time are great.  Dr. Khan’s daily schedule is easily enough for two or three men.  His long and distinguished career has earned him the respect and confidence of the local community, and even at this point in his career, his desire to be of service and give back is as vibrant as I have seen in twenty-year-old students, so he is a good match for the many CFHI students from around the world who choose the Durban program. I especially sensed a love for teaching medicine in a way that guides the students to make their own discoveries.

Among the many hats Dr. Khan wears is that of being the Vice President of the Islamic Medical Association of South Africa.  In the early 1970’s, a few Muslim Doctors, noting with concern the disparate health services under the Apartheid government of South Africa, embarked upon the establishment of a modest Sunday clinic on the south coast of Natal in Eastern South Africa, where there were virtually no services for the black rural community.  This was the birth of what would be called the Islamic Medical Association. With such a deeply personal mission, it did not fade away after the end of Apartheid.  Now almost 40 years later, IMA has set up various healthcare and crisis relief centers operating full time in various places in the country where there is dire need for such facilities; social work and counseling are happening for families and children as well.   The IMA mission challenges them as healthcare professionals to “establish and project a value system that is a living entity in our own lives, and in the practice of health care solely for the service and the pleasure of the Almighty. ” The health professionals who give their service are truly dedicated to improving primary care for the underserved. 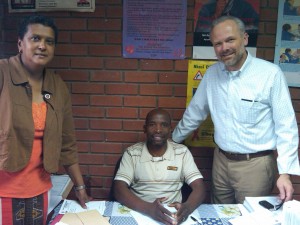 One of the many programs that IMA provides here is a small community clinic in Marianhill outside of Durban, a favorite site for CFHI students.  One of the services that has been happening for some time now is voluntary counseling and testing (VCT) for HIV.  Vusi Ngcobo is the counselor who is responsible for the success of the VCT program here. In an area with such a high prevalence of HIV, it is important that voluntary testing happens so that the virus can be detected as early as possible.  For those found to be HIV-negative, they will still receive valuable information about HIV prevention.

The clinic here and the many other projects of IMA are the continuation of a very long tradition of providing healthcare and teaching medical students. I learned that in ancient times, medical education was flourishing in Islamic society as evidenced by written case studies for teaching that date to the seventh century!