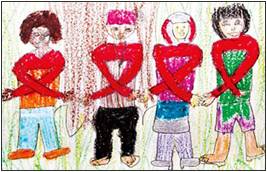 World AIDS Day gives us a chance as a world community to stop and get some perspective on this epidemic that has been with us now for three decades.  In the past this day served as a day for us to remember with dignity those we lost to this horrible disease and as a day for carrying out advocacy to improve and better coordinate our efforts at combating this killer.  Today is still a day for us to collectively morn the incomprehensible human toll.  Today is still a day to increase awareness and mobilize efforts that transcend the hurdles of politics, prejudice, and lack of knowledge.  Indeed “Health, HIV, and human rights are inextricably linked,” as the Director General of the World Health Organization reminds us in her statement today.

On this World AIDS Day in 2010, I am struck by the great amount of information we now have.  So today is also a day for us to look back and see from whence we have come in this effort.   There is great loss, and yes, there needs to be more committed to this effort but the work has gone on for more than 25 years now and there are milestones and accomplishments we must not forget.  The numbers are still staggering, over 33 million cases worldwide, and with over  two and one half million newly infected, etc, etc.  And on the face of it, this can be enough to keep someone feeling discouraged.  But there is hope.  There are things to celebrate. 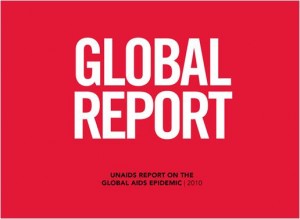 If we look deeper into the Global Report from UNAIDS, we find that although the greatest burden of disease is still in Sub-Saharan Africa, this is also one of the greatest success stories as the rate if infection has dropped considerably.  The report concludes, “In 22 countries in sub-Saharan Africa, the HIV incidence rate declined by more than 25% between 2001 and 2009.”

The Global Report contains a great deal of information that is well presented, and with little effort, one can gain a great deal of perspective not only on the huge effort that we are still deeply engaged in, but also some real sense of what has been accomplished -like the “Significant progress in the virtual elimination of HIV to babies.”  Make one of your “things to do” this World AIDS Day a visit to the UNAIDS Report on the Global AIDS Epidemic 2010.  It contains an AIDS info Database, Epidemiology Slides, a Global Scorecard, and more.  One thing we have clearly done as a global community is arm ourselves with a wealth of information as we combat this continuing threat.  Spend 20 or 30 minutes today educating yourself about one of the world’s greatest crises.

Finally there is one more thing that must be celebrated today and that is the the tremendous and heroic efforts of healthcare workers on the front lines of this epidemic.  One of the great privileges for me as part of CFHI, is the opportunity I get to visit doctors, nursers, and other healthcare workers in the field.  Finding local health professionals who are dedicated to their own underserved communities and trying to support them in their work is at the heart of what we do.  We see them in hospital wards that are overflowing, we see them on strenuous trips to rural areas to test, educate, and treat -thus making healthcare accessible to  more of the population.  We see them in hospitals where the staff room has become a small ward or infection control area thus leaving them spending long hours with no place to go for a break.  We see them in clinics working tirelessly as as line of patients stretches out the door and down the street, more than a city block.  We see them morn the loss not only of patients but of so many of their colleagues, and yet they continue.  We see them in these situations every day, and we see them more dedicated and more earnest in their efforts each day.  These are the real heroes in this global fight and we salute you on this World AIDS Day and we pledge our continued efforts to help support and champion your work.

WHO Director-General, Margaret Chan, called for greater equity in health to be considered as part of how we measure progress as a global community.

“Greater equity in the health status of populations, within and between countries, should be regarded as a key measure of how we, as a civilized society, are making progress,” Dr. Chan said speaking at UN Headquarters in New York.

At the very least, we should all recognize that Dr Chan has a perspective that almost no one else shares.  In her role as Director-General, she has been very active in discovering and learning as much as she can from all corners of the world.  So when she stands before the world’s ambassadors and says, “The world is in such a great big mess,” it is the considered opinion of the world’s doctor.  Of course she was trying to speak in a way that cuts through ceremony and can be easily understood by all.

She went on to give more of her considered opinion, “Pandemic influenza, for example, will hit hardest in developing countries, which have large vulnerable populations. With their weak health systems, these struggling countries will take longer to recover. In many ways, developing countries facing the pandemic are virtually empty-handed,” said Dr Chan.

With calls for systemic change being a big part of recent United Nations discussions, Dr. Chan took the opportunity to advocate for health with the assembled global leadership, “We hear clear calls, from leaders around the world, to give the international systems a moral dimension,” said Dr Chan, “to redesign them to respond to social values and concerns… A focus on health as a worthy pursuit for its own sake is the surest route to the moral dimension, the surest route to a value system that puts the welfare of humanity at its heart. Greater equity in the health status of populations, within and between countries, should be regarded as key measure of how we, as a civilized society, are making progress.”
As noted with her remarks on the WHO website, “One method for achieving fairness, she suggested, would be for more countries to embrace primary health care. As she noted, a primary health care approach introduces greater fairness as well as efficiency, and allows health systems to reach their potential as cohesive, stabilizing social institutions.”

At the Global Health Council conference in Washington, DC, in June of 2008, on Primary Health Care, a discussion involving Dr. Chan at a public session included the notion of  conducting a health systems impact study when any significant funding is allocated.  Typically large amounts of funding from governments, world bodies or foundations focus on a particular disease or health issue.  Too often, in the heroic attempt to eradicate a menacing problem, the impact on, or even the essential contribution of the existing health system and the health workforce are considered only tangentially or perhaps not at all.

The analogy was to an environmental impact report that is often required before any large-scale building or infrastructure projects are conducted.  While environmental impact reports have their own problems, the notion of considering all aspects of the health system in a community or a country can be an important way to find the strengths and successes that will be critical to the success of new efforts.  Building on the local strengths and knowledge of a community and allowing a new idea to be informed by the local cultural wisdom can go a long way to achieving greater equity, including Primary Health Care in the process, and ultimately more efficient progress.