As people gathered from different parts of our country and our world last week at the University of Michigan to commemorate the fiftieth anniversary of the spark that started the Peace Corps, at least some of us experienced a new spark.

It is a rich and storied history of how presidential candidate John F. Kennedy , weary from the long day and the long campaign, reached the University of Michigan campus at about 2:00 AM on October 14, 1960. 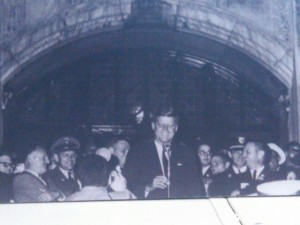 Despite nothing being scheduled to mark his arrival, Kennedy was amazed to find a growing crowd of thousands of students who had gathered to show their support.  Moved by this spontaneous crowd, Kennedy went to the front steps of the student union to address them extemporaneously. The young senator was in a very tight race against then Vice President Richard Nixon, and with only three weeks until the election, no plan had been made for speaking to the students perhaps because the vast majority of them were under 21, the voting age in 1960. But there they were. In a cold drizzle, there they were in the wee hours of the morning; there they were.  . The press had gone to bed; none of these kids could influence the election. It should have been a throw away moment -a simple expression of kindness and cordiality, but it was not.

We were so fortunate last week that many of those who stood in that drizzle fifty years ago came back. They remember it as a special moment, a moment when they felt a challenge, an invitation, a call …a spark!  The history is now recorded, thanks in large part to the University of Michigan, and a wonderful recounting of it is now available in a documentary called A Passing of the Torch. Do yourself a favor and find a way to see it. (It will air on public television in the coming months.)

It was cold and wet in the wee hours this past Thursday, much as it reportedly was at that moment fifty years earlier.  While this was anything but a spontaneous gathering, it was a purposeful gathering. 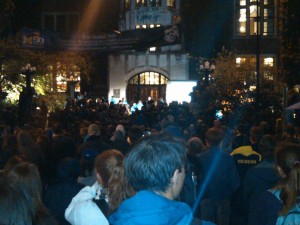 There was a sense of anticipation which felt strange because we were merely commemorating a historical event.  I’m not sure what we were expecting to see …a ghost… I don’t know, but we were drawn there for something.  Thomas Hayden, the editor of the student newspaper in 1960, and now 70 years old, said later at a speaking event on Thursday night that he had not planned on attending the 2 AM commemoration because he had an early meeting that morning.  As the night approached, however, he said he could not help but go, even if only to see if one can really relive a moment of their life –he said he was not disappointed.  He also asked rhetorically and jokingly, “Where is that damn torch any way? Can someone find me that torch?”

As I sat listening to Tom Hayden in a hall filled to overflowing, I realized that was it –the torch.  That is what we were looking for last week.  Whatever the torch is, it has inspired many over the years, and I think we saw it many times last week in Ann Arbor.  And as I listened to Tom Hayden that night, I realized that his words, his memories, his passion for service and fairness, dedication to participatory government and global understanding, -these are the torch.  They are the torch that Kennedy took up and ran with, inviting all to join him.  They are the torch that was passed to that crowd of students fifty years ago by an impromptu speech.  A torch taken up by Al and Judy Guskin (part of the audience for Kennedy’s speech who responded by starting a student movement that led to the Peace Corps –again, wonderful history that you will love) and by every Peace Corps volunteer who has walked in their steps since.  A torch taken up by many of us who have volunteered internationally through a myriad of other organizations.

I think that is what we were drawn to see last week in the early hours of October 14th –the torch.  And see it we did, in the nostalgic eyes of hundreds of returned Peace Corps Volunteers, in the wide eyes of U of M Students eager to make a difference, in the stories of fifty years ago that felt like they could happen again.  And indeed they were happening. 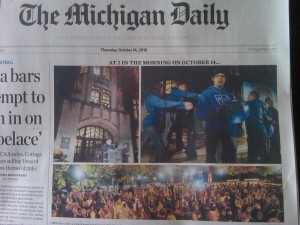 We were given a renewed challenge and invitation.  We were invited to join a new initiative called Service World (www.ourserviceworld.org) with the aim of achieving JFK’s goal of having 100,000 U. S. citizens doing international service annually.  Just as a petition was drawn up by Al and Judy Guskin in 1960, signed by over a thousand U of M students, and led to the establishment of the Peace Corps, Service World has a declaration that is now being circulated globally.  Fifty years later, international service has become a global ideal. Thanks in large part to the model and the success of the Peace Corps.

It only makes sense in today’s world that a call to globalize Kennedy’s great challenge would arise.  Those of us who were in Ann Arbor this time felt a quiver deep inside us that was something other than just a reaction to the damp and cold around us.  Was it a spark?  Was there a torch that was being offered to be taken up?  I know that no torch can be seen in any of the photos or video that everyone recorded, but I also know that it will be seen in  all the renewed efforts for international service, and in the hearts of all those who go to the Service World website to virtually sign the scroll in support of the ideals that have spanned many years and lives and are still alive inside us today.  Anyone can participate.  Here is the text of the Service World Delcaration:

We envision a world in which volunteer service is a common strategy by people of all nations in meeting pressing challenges in education, health, the environment, agriculture, and more. We seek to foster an international culture of service and a heightened sense of compassion across borders that will bring volunteers of different countries, cultures, races, ethnicities and religious beliefs together for common purpose. We encourage individuals and organizations to engage in volunteer service in order to increase prosperity, strengthen economies, implement more informed foreign policies in all nations, and lay a foundation on which governments and civil society can build a more peaceful, healthy and secure world.

We stand ready to serve and support Service World’s bold agenda to expand volunteer opportunities for individuals internationally — at every age and among all socio-economic groups — to learn about global problems and help find more effective ways to solve them.

If these words resonate deep inside you, then please add your name to the scroll and pledge your support for a renewed call to international service that can transform all who are touched by it. If you know others who share this vision, invite them to add their name.  Every supporter we can get will help us convince policy makers that international service is important, needs to be nurtured, and will pay dividends for us all.