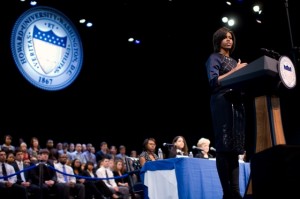 As part of the official visit of President Hu to Washington, First Lady, Michelle Obama spoke to a captivated audience at Howard University saying that when you go abroad, “you are shaping the image of America projected to the rest of the world.”  While Mrs. Obama was trying to promote a campaign to increase the number of students going to China, many of her comments are applicable to any cross cultural learning experience:

“…studying abroad isn’t just an important part of a well-rounded educational experience. It’s also becoming increasingly important for success in the modern global economy. Getting ahead in today’s workplaces isn’t just about the skills you bring from the classroom. It’s also about the experience you have with the world beyond our borders — with people, and languages, and cultures that are very different from our own.”

Last Spring, her husband, President Barack Obama, spoke to students at the University of Michigan saying:  “As our world grows smaller, more connected.  You will live and work with more people who don’t look like you, or think like you, or come from where you come from.”  And almost in a response to these words by her husband, Mrs. Obama went on to say:

“That’s why it is so important for more of our young people to live and study in each other’s countries.  That’s how, student by student, we develop that habit of cooperation, by immersing yourself in someone else’s culture, by sharing your stories and letting them share theirs, by taking the time to get past the stereotypes and misperceptions that too often divide us.

That’s how you build that familiarity that melts away mistrust.  That’s how you begin to see yourselves in one another and realize how much we all share, no matter where we live. ”

CFHI programs have always focused on immersion into a culture, into a different helathcare system.  Rather than staging impressive extraordinary displays for students, CHFI’s Global Health Immersion Programs give students a real slice of life, giving the participant and authentic experience of what it is like to be a health professional in that country.  Some days may be very low key, other days in a hospital may be overwhelming.   Regardless of the program, the bonds that students have made with professionals, with host families and with each other are very strong and lasting.

The Volunteer Board of Directors of CFHI functions far from the limelight but plays an essential role in the success of CFHI.  We congratulate Gunjan on this accomplishment!  Gunjan’s expertise as an entrepreneur has been indispensable to CFHI over the years, and we are sure he will be viewed the same way in his new role.

The meeting follows the June 3rd discussion between US Secretary of State Hilary Clinton and India’s External Affairs Minister Shri Krishna that focused on the importance of facilitating cooperation in strategic and high technology sectors as a key instrument to achieve the full potential of the strategic partnership between the two largest democracies in the world.

The delegates at the commission include senior officials from various US federal agencies and departments including the Office of the Chief Technical Officer, Office of International and Tribal Affairs, US Environmental Protection Agency (EPA), US National Institutes of Health (NIH), US Department of Energy (DoE), National Science Foundation and Bureau of Oceans, Environment and Science.

The joint commission between the two countries and the US-India Endowment Board will look to inspire public good and economic prosperity in US and India, through science and technology cooperation, greater public-private partnerships, promoting innovations and entrepreneurship and creating appropriate policy environment for greater bilateral co-operation. Areas of focus of the Endowment Board will include such significant areas like Food Security, Climate Change, Energy Policy and Healthcare among others.

In line with the mission of the White House Office of Science and Technology Policy, the commission’s aims to ensure that Federal investments make the greatest possible contribution to economic prosperity, public health, environmental quality and national security, and to foster professional and scientific relationships with government officials, academics and industry representatives for providing policy-relevant advice, analysis and judgment for the President on major policies, plans and programs of the Federal government

In May 2009,  President Barack Obama issued a statement on global health. “We cannot simply confront individual preventable illnesses in isolation,” the president said. He continued, “The world is interconnected, and that demands an integrated approach to global health.”

Read more of the President’s remarks.