“Modern medicine’s focus on mastering each part of the human body and the diseases that make them malfunction has generated remarkable power to sustain life. But this focus… has neglected the dying and their suffering, as if repressing a shameful secret.” (1) 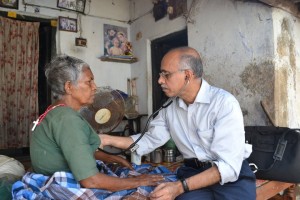 no secret to Dr. M. R. Rajagopal, co-author of a new piece in the Lancet that reviews the 2015 Index. As the founder and Chairman of Pallium, India, he has brought palliative care to the fore in India through education, advocacy, and service provision. Through various initiatives, he has dramatically expanded access to palliative care in India’s state of Kerala and beyond.

Dr. Rajagopal and Pallium, India, are CFHI partners and offer CFHI students the opportunity to learn firsthand about palliative care in Kerala.

Despite notable limitations in the 2015 Index (lack of a comparable instrument for validation; the fact that it excludes countries from the study which offer no palliative care services whatsoever, to name two), the authors offer this conclusion: “The 2015 Quality of Death Index is an insightful and credible effort that laudably calls attention to the woefully inadequate care for some of the neediest and most vulnerable patients across the world, those near the end of life.”