Courtney James is a Senior Resident in Baton Rouge, LA and a member of the American Medical Women’s Association (AMWA). Courtney received a scholarship to participate in CFHI’s program Exploring HIV & Maternal/Child Health in Kabale, Uganda in November 2015. The following is an excerpt from her blog “CFHI Uganda Experience.” This post was originally published on December 29, 2015.

I visited the Traditional Healer during my stay. You can’t fully understand health in Kabale without discussing the Traditional Healer’s role. I believe they quoted a percentage of about 90% of Ugandan natives have utilized the traditional healer at some point in their lifetime. The healer is sought for a multitude of ailments such as malnutrition, allergies, arthritis, GI issues, sexual dysfunction (hahaha). He has so many different herbal remedies that he prescribes for each issue. 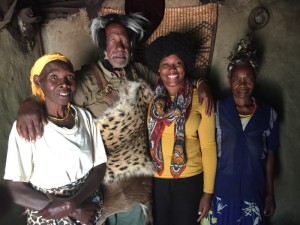 KIHEFO has respectfully bridged a partnership with the healer in hopes that the two entities can coexist without disregarding the other. KIHEFO has provided education to the healer regarding complex cases that should be referred for medical intervention, especially Malnutrition. So many people believe that malnutrition is due to a curse and therefore they seek the healer’s herbal remedies in hopes of curing the child. This is very dangerous and unfortunately some families seek medical treatment when things are severe. Since KIFEHO has started communicating with him the healer does sometimes refuse to treat complex cases and KIHEFO has seen a reduction in the severe cases that present to the Nutrition center.